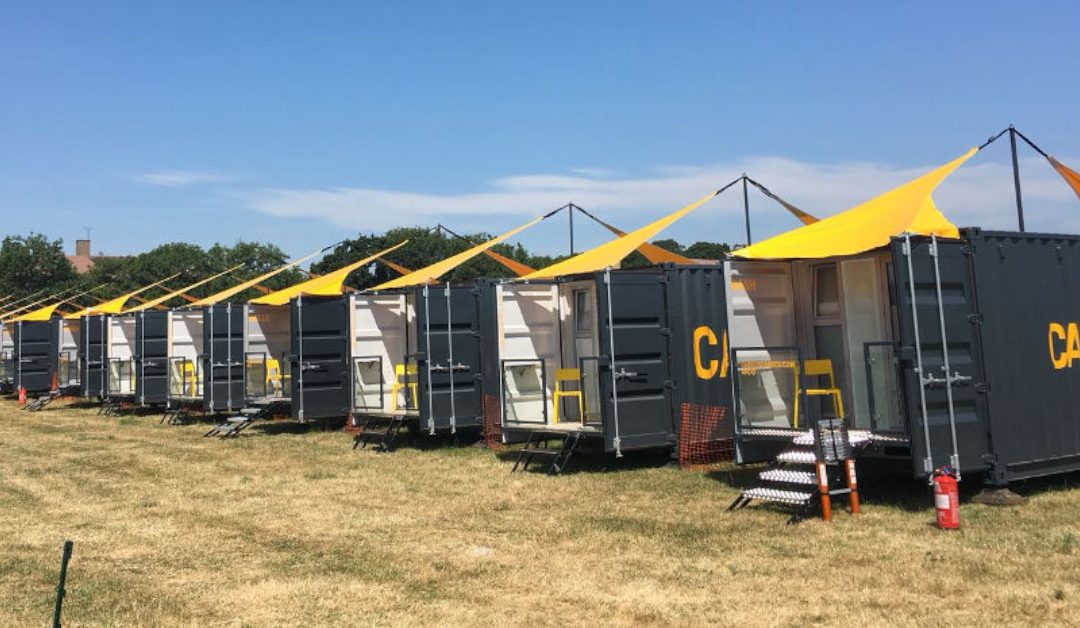 Caboose & Co are so excited to have popped up at The Royal International Air Tattoo Festival 13-15 July 2018!

At Air Tattoo 2018, we have 18 Cabooses set up as home to the RAF Charitable Trust’s volunteers for the weekend. The Air Tattoo relies heavily on the RAF Charitable Trust volunteers to help run the festival and we wanted to give them somewhere special and comfortable to lay their heads after a busy and exciting day. There are 36 bedrooms set up for them, each with en-suite, electricity, water and a super-comfy proper bed!

This year the Air Tattoo, is being held in Fairford, Gloucestershire, commemorating, and celebrating with RAF100 and it’s centenary! The Air Tattoo is staging the international celebration for RAF100, and air forces from around the world will join us to give a ‘global salute’ to the Royal Air Force.

he Duke of Kent and HRH Prince Michael of Kent will be there and flypasts featuring operational aircraft such as the new Lightning, Typhoons, Tornado GR4s, the Red Arrows and also Puma and Chinook helicopters are scheduled. Also set to feature are RAF100 themed flypasts starring a special ‘617 Squadron Tribute’ of Battle of Britain Memorial Flight (BBMF) Lancaster, Tornado GR4 and the new Lightening jet.

As well as the exciting flypasts, there will be a large area on the ground dedicated to RAF Centenary. Visitors will be able to glimpse into the RAF’s past, present and future with aircraft available to view. As well as this, visitors will get the chance to meet with those currently serving in the RAF and learn about the variety of roles they experience as part of today’s RAF.

We hope to see you there!

This website uses cookies to improve your experience. We'll assume you're ok with this, but you can opt-out if you wish. AcceptRead More

This website uses cookies to improve your experience while you navigate through the website. Out of these, the cookies that are categorized as necessary are stored on your browser as they are essential for the working of basic functionalities of the website. We also use third-party cookies that help us analyze and understand how you use this website. These cookies will be stored in your browser only with your consent. You also have the option to opt-out of these cookies. But opting out of some of these cookies may affect your browsing experience.
Necessary Always Enabled
Necessary cookies are absolutely essential for the website to function properly. These cookies ensure basic functionalities and security features of the website, anonymously.
Functional
Functional cookies help to perform certain functionalities like sharing the content of the website on social media platforms, collect feedbacks, and other third-party features.
Performance
Performance cookies are used to understand and analyze the key performance indexes of the website which helps in delivering a better user experience for the visitors.
Analytics
Analytical cookies are used to understand how visitors interact with the website. These cookies help provide information on metrics the number of visitors, bounce rate, traffic source, etc.
Advertisement
Advertisement cookies are used to provide visitors with relevant ads and marketing campaigns. These cookies track visitors across websites and collect information to provide customized ads.
Others
Other uncategorized cookies are those that are being analyzed and have not been classified into a category as yet.
SAVE & ACCEPT